United Kingdoms of the Taareh

Arrogant. Meddlers. Old as dirt. The Taareh know what’s best and will not hesitate to tell you. These are things that every human know about the Taareh.

More specifically, they are referred to as Q-Humans in that they are the strain of humanity that originates from Qebe. They are a “proud scholar race” of the decidedly scientific but decidedly non-pacifistic variety. They are pragmatic, skeptical, xenophobic and racist. It is not known for certain whether extra-solar Qebish people were seeded on Terra in the Nile Delta region, or vice versa; without a lot of outside influence as they developed, the culture remained far more homogeneous and intact than its Terran sibling.

Physically, Taareh and humans appear very similar, with the Taareh lacking the distinctive “dip” where the nasal bone meets the skull. Compared to baseline humans, Taareh also do not have eyebrows and their eyes are inevitably a distinctive gold in color. Additionally, having originally evolved on a slightly higher gravity world, they are notably shorter than human norm. As members of a much old species with a more rigid biochemistry as well as a genetically engineered race, most Taareh have similar features, which has inevitably led to the joke that “they all look the same to me.”

Similarly to the two other cultures that are as old or older, the Taareh are organized along a strict caste system that are, in terms of rank importance:

Each caste has a unique color related to them that generally applies to their clothing choices. Due to the rigidity of their culture, few within a caste wear anything but these colors, although those assigned to various tasks often wear indications of this; for example, a military medic is officially part of the Philosopher caste but serves alongside Warriors, so he might be able to add Warrior colors in tiny bits to indicate this.

Lineage is utterly irrelevant to the Taareh but genetics are not. Fetuses are genetically engineered to accomplish specific tasks (hence the caste system) and brought to term in ‘birthing matrixes’ which effectively makes all Taareh tubies. When born, infants are placed in an appropriate creche where they are raised to adulthood. Freeborn children are inevitably looked down upon and generally slotted as either Workers or Rankless. Among the Rankless, there are the inevitable legends and myths about one of their own rising to the gold, but official dogma does not recognize any such historical event or person. 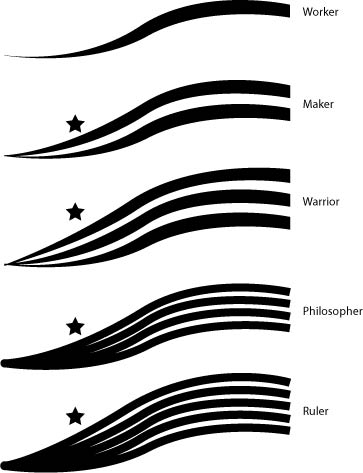 To indicate one’s position within the greater society, each Taareh (excepting the Rankless, of course) receive facial tattoos according to their caste: one stripe indicates a worker, two indicates a maker, three indicates warrior, and so on. These tattoos are granted upon their ‘graduation’ from the creche and require most of the skull to be shaved, as the ‘stripes’ continue around the entire head. Every year, upon the day of their advancement from the creche, any Taareh capable of doing so celebrate their status as an adult by having these tattoos touched up.

To further indicate their exact status and rank within their caste, small, metallic studs are secured above the brow, the design of which varies according to the Taareh’s specific assignment. A space-based career, for example, such as a star marine or ship commander or naval crewman would bear a stylized star. The number of designs for these studs are, understandably, limited, with the most common being circular (any ground-based career), star-shaped (any space-based career) and diamond-shaped (any career that cannot be limited to these two, such as a ruler-king.) No Taareh may have more than two studs over either eye; upon reaching rank four, the studs closest to the nose transition to a metallic color according to one’s caste, so a rank four warrior would have one black and one reddish one, while a rank five ruler would have two gold studs over either eye. Even kings bear only two golds, though they traditionally don a head-dress that adds a third stud when worn.

In Traveller terms, the following chart applies with regards to SOC characteristic and one’s “rank” within their caste.


“Changing your studs” is a widespread saying indicating a change of career within one’s caste; for example, a star marine who transitioned to a ground-based career would have the star-shaped studs (if he or she was eligible to wear them) changed to simple circles to indicate that he was now a planet-based warrior and has thus “changed his studs.” There is no equivalent saying about changing one’s caste as it simply isn’t done.

Wearing the color of a greater caste is severely punished and those cast out are stripped of their rank (and tattoo) entirely in an extremely painful process.

Taareh generally just have a single name that is attached to rank and position, so, for example, you might have a frigate-analog ship commander going by ‘Twosret, Shipmaster, Khonsu Warship’ and a wandering adventurer named Baefre, Wayfinder, Moros System.

United Kingdoms of the Taareh