They find themselves aboard the Anne Bonny, a pirate ship captained by a former acquaintance of Ilik’s named Claire O’Rourke. She reveals that the Abzu’s Bounty completely vanished and they extracted the crew from the wreck of that boarding shuttle used to escaped the Fenris-class light frigate in the Graveyard before it exploded; the PCs were in varying stages of injury and her medic patched them up. From her, they also learn that the offices of Krystal Kleer on Lloegyr conveniently exploded a little less than 24 hours later, right around the time that the SpaceFarer’s Collective had identified who owned the Bounty and began to investigate…

From Captain O’Rourke, they also learned that the Bounty’s XO was the one who tipped her crew off about the expedition into the Graveyard and she has already set up a buyer for the salvaged computer core at Prometheus Station, a backwards nowhere of a mining colony. It’s a week away from their current destination because they’re running at low power to minimize their sensor signature. To the rescued PCs, she offers an invitation to join her crew for a life as a ‘thrilling space pirate’; the responses run the gamut from very interested to super cautious.

A week elapses as the Anne Bonny creeps across space, during which time the PCs begin integrating into the pirate crew. Baefre finds that the ship’s navigator is a Rankless Taareh who was former PKF until stripped of his caste and position for an accident that he insists was the fault of the shipmaster; this Rankless is an almost immediate convert to what Baefre is preaching. Niall is the first to be welcomed as several of the pirates are former patients of his and are eager to express their gratitude for him saving their lives. Anya finds a much colder reception as stories about her ability to survive in vacuum without a suit have, as all stories do, evolved into something else; she spends the week basically experimenting on herself, discovering that she needs a vast quantity of food but also that she does not seem to need sleep either! Rostya, the most interested in becoming a pirate, also decides to pursue Captain O’Rourke in a romantic manner, much to her (and the GMs!) chagrin. For his part, Ilik is very amused over Rostya’s efforts and discreetly lends a hand while also spending some time gambling with the crew, getting to know them while learning some of their secrets. And finally, Korbin learns that Captain O’Rourke has the IFF module he obtained on the light frigate and wants to be cut in on whatever secret deal he has going; he acknowledges that there’s a deal and hints that there may be a place for her going forward… 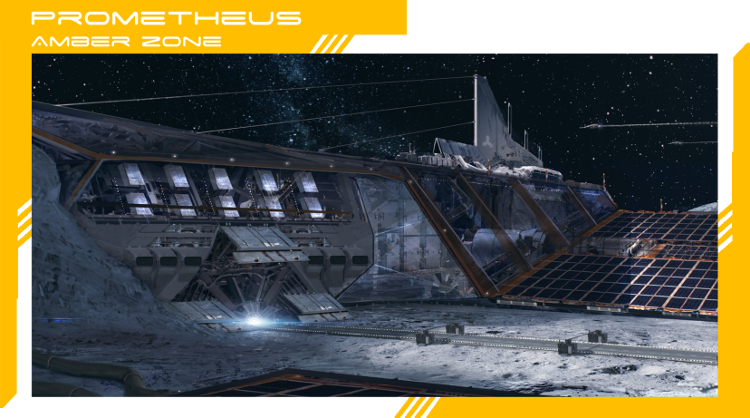 At Prometheus Station, Captain O’Rourke assembles a landing party with half of her crew. Baefre, Ilik and Rostya all ask to go and they are allowed, but unlike the others, are not armed and are instead given the job of toting the computer core. At the meeting place deep within some abandoned mining tunnels, Captain O’Rourke greets her contact, identified as Hector, who has come with a mostly equal number of guards. They begin negotiating and Ilik cannot help but notice that one of Hector’s men is acting twitchy…

And then, chaos erupts. From the shadows, concussion grenades are hurled and gauss rifles fired, with multiple people falling, among whom is Captain O’Rourke and Hector. Unarmed and recognizing that they’re in a deadly kill pocket, Rostya grabs the fallen captain and begins a retreat with Baefre and Ilik doing the same. Ilik sees the twitchy guy snatch the computer core and race it to an mystery figure wearing unfamiliar armor, who then promptly shoots Twitchy with a gauss pistol before withdrawing back into the shadows with the core. Ilik then flees alongside his two fellow crew, with Rostya doing what he can to stabilize the mortally wounded captain, even as Ilik discreetly uses his telepathy to lift the command codes from her mind.

At the Bonny, the rest of the pirate crew snatch up weapons and race out of the ship, intent on joining the captain’s expedition, now under fire, but are ambushed by the same kind of armored personnel who cut down the pirates with gauss rifle fire. Korbin, who was slowly following the pirates to see what was going on, quickly retreats back into the boat, shouting for Anya to seal the ship up. She does so and soon after can see the armored men withdrawing. The crew will later be able to piece together that the team leaving the landing bay did so after the man in the tunnels retrieved the computer core.

Station security arrives soon after, taking into custody all of the survivors … which is just the PCs as it turns out. Its quickly apparent that security is horribly overwhelmed and badly unqualified for this sort of investigation as they botch every major aspect of it in record time, bristling when Korbin attempts to direct their efforts in a proper direction. By the end of the day, any potential suspects for the attack have managed to make good their escape and covered their tracks quite well, leaving the PCs to rot in a cell.

Into this mess comes a mysterious benefactor named Diana. She would like to help the PCs, presuming they can help her. As it turns out, she needs to get to Foothold as soon as possible and all that is available at Prometheus Station are rockhoppers. Thus, she offers to get the PCs out of the clink, the landlock lifted on the Bonny and cleared to depart if they’ll take her there.